It was during the first quarter of 2014 when all the news about rape cases and abuse of women in India were accentuated to the world that we had the sudden urge to book a flight to this South Asian country. We were very much aware that this trip is gonna be disquieting as supported by opinions of other tourists I have read in many travel blogs and forums. It seems people are discouraging travellers to come visit India specially when you are in a company of a woman. I’m scared like sh*t but the thought of how magical the feeling would be when I get to see the Taj Mahal pushed me to the cliff and booked the tickets. My friends, 2 gentlemen travelling with me, were kinda freaking out in the inside too upon stepping foot at the New Delhi Indira Gandhi International Airport. I sensed it. Haha. .

We booked flights to and fro New Delhi via Air India. The plane for our departure from Singapore, supposedly at early morning, had some technical problems that caused us so much delay. The Air India staff then informed us we were gonna be flying via Singapore Airlines since the problem with the Air India cannot be fixed. But there will be limited seats on 2 flights on the night of same day. It also comes with “first come first serve” so we ran like we were competing in Olympics’ 500-meter sprint to make it to the first in line at the SQ reception. All those who cannot be accommodated in the 2 night flights were advised to depart the next morning. We didn’t make it to the first of line but we stood and waited at our nth positions for hours and luckily we made it to the first flight on the same night. I can see the disappointment on other people’s faces but we cannot afford to give them our slots because we only have a weekend to see what India has to offer. I also saw a Caucasian woman, travelling alone, that though she’s in line near the reception and she can probably make it to the first 2 night flights, she decided to take the morning flight as advised by the many kind co-passengers who are very concerned about her safety when she arrives New Delhi at midnight. During our longest stay in Changi airport, in my and friends’ heads “could this be the sign that we shouldn’t go to India?” haha. . One of my friends, the most financially independent among us and I guess the most scared (haha, peace!), was already decided to go home but we convinced him to pursue this adventure. The flight tickets going to New Delhi isn’t cheap, you know?!

At the airport in New Delhi while we were securing our visas (Philippine passport can secure a visa upon arrival), we met a Filipina who happened to marry an Indian national. She gave us lots of advice (which actually scared me more, haha) and was kind enough to accompany us until near our hotel – she asked her husband to pick her up near our hotel – which made us comfortable while we were in the cab from airport to hotel past midnight. Below are the basic points she firmly imprinted in my head which I have never forgotten though I met her more than half a year ago:

She was kind and funny but all her instructions ate majority of my brain cells that caused my paranoia meter to abruptly go up. Huhu. . How can you enjoy a trip when you’re too uncomfortable with the place? I worried too much thus my insomnia attacked me on my first night in New Delhi. The next day, we were scheduled to go for a long drive going to Agra.

On our 5-hr journey the next day, we observed how the people are really treating the cows as a sacred symbol of Hinduism. Cars slow down amid walking cattle on the streets. We also observed how they maximize the ignored purpose of the cow dung. We saw piles of dung being dried up on the sides of the streets; they use it as a fertilizer and fuel in general. I have also observed how public buses were only occupied by men and how in the 5-hr drive I’ve only seen very few women walking in public, if I’m not mistaken I have not seen exceeding 10 and they were all working on the cow dung.

We reached Agra in the late morning. For a while we’ve lost our paranoia and the little 7-year-old souls in us were excited to see the Taj Mahal. The gates of the Taj are already mesmerizing on its own with the red walls, Arabic calligraphy and all. Before we finally see the famous Taj Mahal, the tour guide gave us a little background about this awe-inspiring white marble mausoleum which I find really interesting. Love stories of ancient times never ceases to melt my heart. Story of people’s struggles and hard work with very limited resources and machinery during the construction of an unbelievable architecture are just what make it’s history so interesting. The tour guide asked us to close our eyes while we walk a few steps from the gate. This drama just added my “I WANNA SEE IT, I WANNA SEE IT NOW!” screams in my head.

And when we opened our eyes, my teary eyed face can’t believe how beautiful the Taj Mahal is. It is so unbelievably stunning that I can feel Shah Jahan’s pain and sadness when Mumtaz Mahal died and when he was house arrested at Fort Agra with the view of her illustrious tomb from afar. The mausoleum is too ravishing that the towers at the 4 corners were intentionally built slightly leaning outwards from the main infrastructure so that in case the towers collapse, it will not fall unto the direction of the tomb. 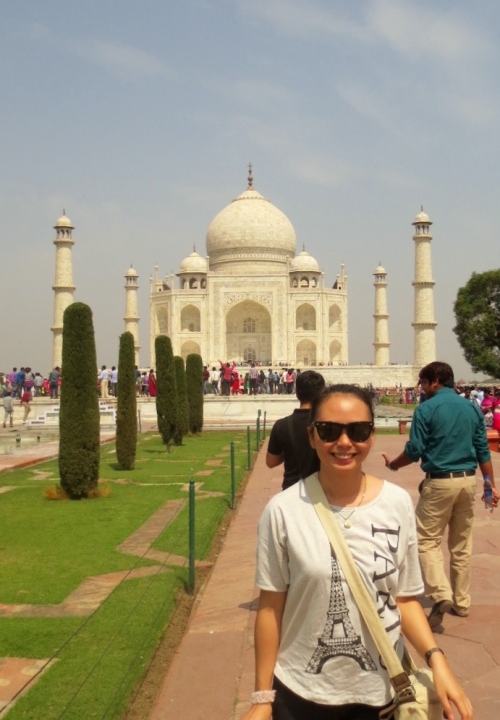 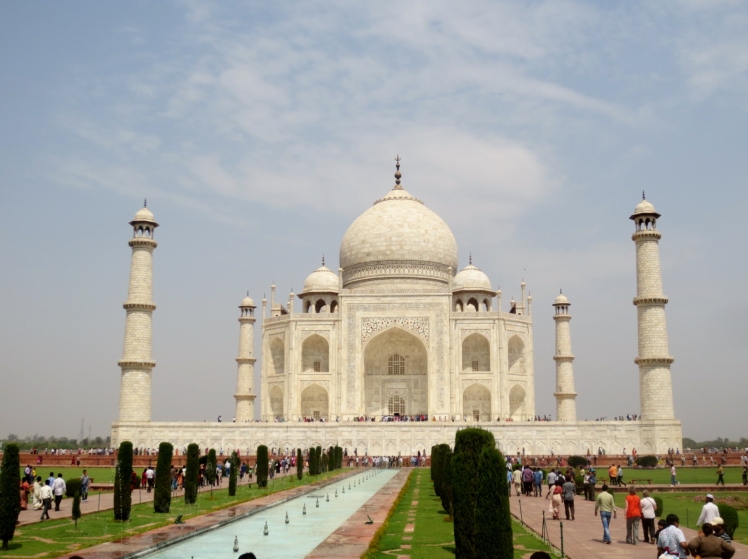 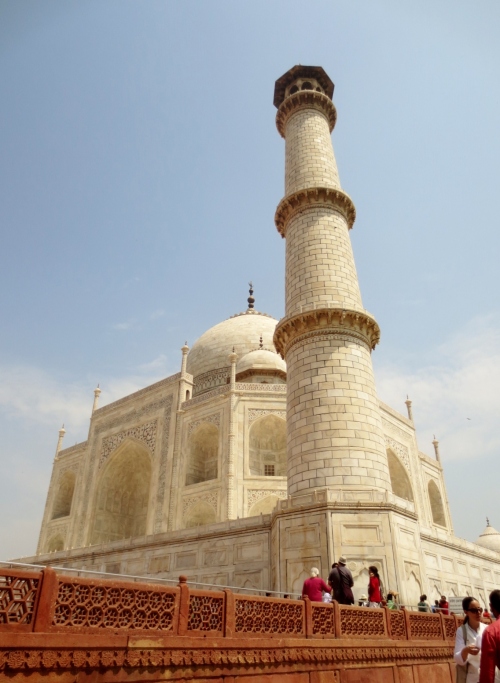 After Taj Mahal, we didn’t have the energy to explore the insides of the Fort Agra but we took pictures of it from the outside. We had a very nice buffet lunch and headed to one of the famous jewelry shops – Sanskriti Imperial Gems – after our tummies were filled. We met the owner of the jewelry shop and of course we were offered some of their items. After a long discussion, I finally gave in and bought a Ruby Star of India pendant for myself which includes a lifetime guarantee certificate that’ll make you eligible for any jewel exchange in case the gem has been damaged for some reasons. My birthstone is ruby, and I am not sure if I can still go back to India so I decided to buy it as a memorabilia. Their jewelry collections are too salivating but of course they come with a price not even at the range of my salary. Hehe. . We left Agra in late afternoon and reached our Hotel in New Delhi at night.  It was a tiresome day-long trip but what I saw is something I will treasure and never forget until the day I die. . Naks! For some time we’ve forgotten all the freaky news about India; we actually found the local people warm and hospitable in a sense. High risk indeed comes with great reward. I feel the urge to encourage you guys to see Taj Mahal for yourselves too. .  I must say visiting Agra, even for Taj Mahal alone, is really worthwhile. I promise. . 😉